Stratospheric Ozone: How we came to understand its chemistry and response to perturbations 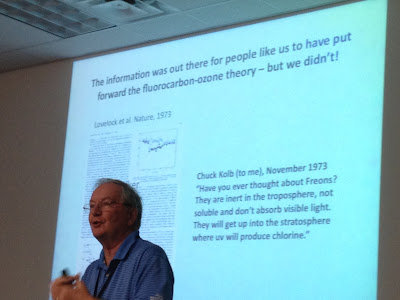 Richard Stolarski (Emeritus Scientist, NASA/GSFC) gave a historic account of ozone research in the past century and how its continued understanding led to avoiding one of the biggest global climate-health risks in today’s world. Yes, indeed, we are talking about the “Ozone Hole”. Richard started off by reviewing early research by pioneers such as Sydney Chapman who was the first to show the underpinnings of the chemistry of ozone formation in the stratosphere. This important discovery enthused the scientific community to further understand the regeneration and removal of ozone via fast chemical reactions and also led to first measurements of ozone in the ultraviolet. Around this time, in the early 1970s, Richard got involved in a NASA project to study the possible environmental effects of space shuttle operations, which was one of the earliest works hinting on the destruction of ozone by humans. Also, during this time, long-term ground-based measurements in the remote Antarctic showed first signs of what we now know as the Ozone Hole. Stolarski’s research, in the 1980s, using NASA’s spaceborne measurements from TOMS and SBUV instruments confirmed the widespread thinning of stratospheric ozone. The physical basis of depletion of ozone by CFCs, provided by Molina-Rowland and Crutzen, led to the most successful global treaty till date, a.k.a. Montreal Protocol, of phasing out usage of CFCs and thus avoiding serious future implications. This was an exciting time for ozone and climate change research, and Stolarski’s contribution was of critical importance -- Summary by Ritesh Gautam
Posted by Pawan Gupta at 5:47 AM