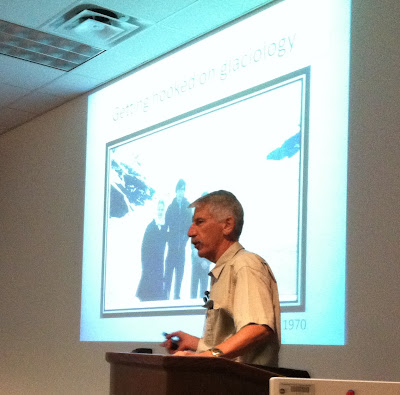 While we were ready to go on an expedition to discover "what ice sheets hate?", we realized that not only an expert on ice sheets but also a "sherlock homes" was leading the expedition! So, the journey began with much enthusiasm and included an element of suspense in it! Dr. Robert Bindschadler, like other maniac talk speakers, reiterated that science was fun and that passion could lead to great discoveries that have a potential to better life on Earth. Bob is an Emeritus Scientist at NASA Goddard Space Flight Center. In his ~30 years of career, he has led ~17 expeditions to the Antarctica and has been a part of several other expeditions around the world.

Bob emphasized how direct observations have helped in understanding the melting of sea ice and its impact on climate. He brought to light that the great ice sheets of Greenland and Antarctica are shrinking faster and faster, increasing the rate of sea level rise.  Observations of this accelerating ice loss have surprised the experts and confounded the predictive models that policy makers might rely on to take action. He said that “the distant future is easy to forecast—less ice on Earth—one million years of paleoclimate data say so, but more detail is needed” He suggests that there is no substitute to direct observations, which is crucial to improve our understanding. Calls for more field studies!


The climax of the talk i.e. “what ice sheets hate?” turned out to be a big surprise when we learnt that they hate water – yes ice hates water in this case! A very simple concept unfolded: the water in the crevices of the ice sheets drives the crevices deeper and basically causes them to crack further. With the help of the audience, Bob constructed a unique working model that demonstrated this concept. This was perhaps the first chance for many of us to be a working model in the scientific world!

Bob summarized that the ice sheets will continue to shrink in our warming climate and sea level rise will likely accelerate. This has significant impact on human populations. The current “best estimate is one meter higher sea level by 2100! So, in Bob’s words “while scientists have “fun” doing science, we also appreciate the seriousness of climate change and the importance of accurate projections and that we have to help advise decision makers.” -- Falguni